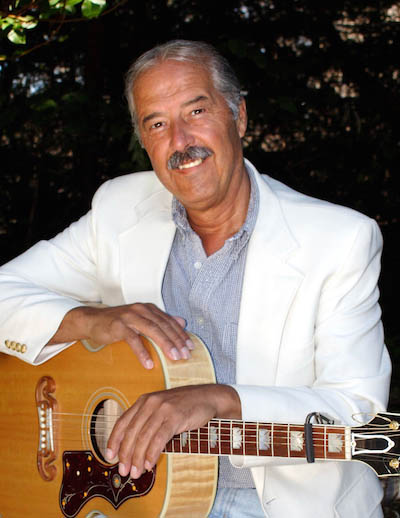 What do Elvis Presley, The Teletubbies, Monty Hall, Charles Darwin, The Apollo 13 Mission, the guy who invented the car alarm, Coronation Street, The Pope, Jean Cretien, Randolph Scott, The K-tel Pattie Stacker, the Devil, God, The Clapper, Kicking in a Television, George Bush, The Monkey, The Frug, The Twist, The Watusi aaaand two grown men shopping at Value Village all have in common?

They are characters and situations that have made appearances in the songwriting of Dennis Lakusta. Dennis. who currently resides in Nanaimo, is a prolific artist and songwriter and credits his Cree ancestry, Monty Python and Jonathan Swift for his somewhat irreverent take on North American culture. Sacred Cows, bring ’em on – Lakusta delights in lampooning the lunacy that he witnesses, both in himself and in the crazy world around him.

In addition to his razor-sharp wit, Dennis’ concerts also offer up a multi-faceted feast of variety, color and depth which all testify to a life well-lived. He has traveled the world and seen a lot, both good and bad, and his songs are a direct reflection of the people and experiences encountered along the way. Never one to shy away from thorny issues, Dennis’ subject matter includes; The invasion of Iraq, the obscene wealth and holding of the Vatican, the blind and wanton destruction of our once beautiful planet, institutional racism and the Indian Residential schools, The Sue Rodriguez and Robert Latimer cases, the flagrant assault on our most basic rights and civil liberties, etc. Not for the faint of heart.

Dennis’ third strong suit in songwriting is in the area of spirit and introspection. Besides coming to terms with the people and situations in the world around him his lyrics reflects a deep desire to understand the profundities buried within his own being. Captain Kirk, Dennis claims, was wrong – space is not the final frontier – the ultimate and most profound voyage is 180% in the opposite direction, within ourselves. His lyrics, vision and the understated delivery of these have occasionally been compared to the writings of Rumi, the 13th century Sufi poet. This third strength, combined with the cutting-edge humor and topical songwriting make for a wonderful and memorable evening indeed. For those who attend a Dennis Lakusta concert, expect to laugh, expect to cry and, mostly, expect to think.

Conventional wisdom has it that when you reach the age of 70 you’re supposed to slow down, relax in your rocking chair and try to enjoy your ‘sunset’ years – this is a concept, a mean-spirited social construct and a bill of goods sold to us by the same fellows who brought us the Industrial Revolution. Dennis, along with many of his contemporaries who form the vanguard of the baby-boomer generation are about to blow that concept out of the water. He is currently active in eleven different art disciplines, each a bone fide career on its own and they include; singer, songwriter, producer, composer, visual artist, photographer, humorist, author, inventor, activist and educator. He is truly a rolling stone who has no intention of gathering any moss – Dennis tours the high school and university circuit with a wide variety of original programs dealing with hot button issues such as…

The past three years have seen an explosion in songwriting for Dennis – he now has forty five brand-new compositions, many complete with lyrics and is preparing to produce and record his seventh and eighth CDs which he hopes to have out by the fall. Add to this a new and exciting photographic collection to be launched this year and you can see what ‘Golden Years’ means to this renaissance man.

This website uses cookies to improve your experience while you navigate through the website. Out of these, the cookies that are categorized as necessary are stored on your browser as they are essential for the working of basic functionalities of the website. We also use third-party cookies that help us analyze and understand how you use this website. These cookies will be stored in your browser only with your consent. You also have the option to opt-out of these cookies. But opting out of some of these cookies may affect your browsing experience.
Necessary Always Enabled
Necessary cookies are absolutely essential for the website to function properly. This category only includes cookies that ensures basic functionalities and security features of the website. These cookies do not store any personal information.
Non-necessary
Any cookies that may not be particularly necessary for the website to function and is used specifically to collect user personal data via analytics, ads, other embedded contents are termed as non-necessary cookies. It is mandatory to procure user consent prior to running these cookies on your website.
SAVE & ACCEPT